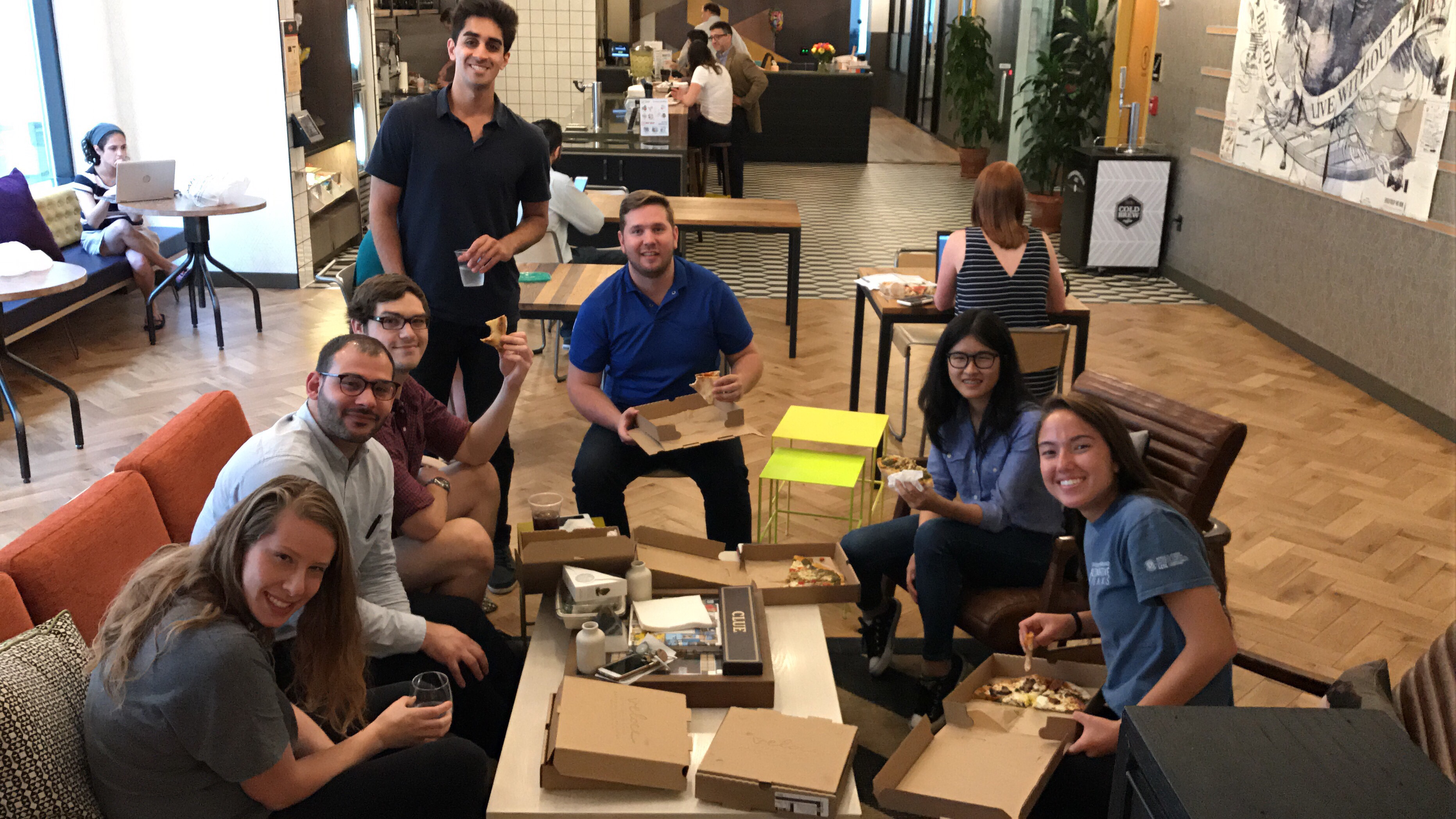 Getting coffee. Running errands. Trying to fix the printer. These may be typical tasks at many internships, but at Hatch Apps it’s a little different.

From marketing campaigns to operations projects, our interns are valued team members who contribute everyday to make lasting difference. To give you a little taste of the intern experience here at Hatch Apps, we sat down with three former interns. Meet Devon O'Dwyer, a Government major at Georgetown University, Isabel Shaw, who studies Behavioral Decision Sciences at Brown University, and Gina Fuchs, a graduate from University of Maryland who majored in Communications Studies and is now a Program and Community Coordinator at Kode With Klossy.

Q: So why did you decide to come work at Hatch Apps?

Devon: I decided to work for Hatch Apps because I wanted to gain digital marketing experience, and I also was excited to have the opportunity to work for a fast-paced startup.

Gina: I was really interested in what the company was doing. I had a bit of a techy background and really liked the idea of tech accessibility in the way Hatch Apps imagined it. The thought that there was a new product where anyone could create an app without a super technical background was so cool to me.

Isabel: I had been scanning DC startup news because I thought interning at a startup would give me the chance to work on projects that were relevant and important. Hatch Apps stood out because their mission of making complicated tech accessible to non-technical entrepreneurs resonated with me.

Q: What kind of relevant experience did you have before the internship?

Devon: Before the internship, I had some experience working at other startups. The summer after my freshman year of college, I worked for a startup in my hometown of Wilmington, DE called the Summer Learning Collaborative. I also worked for Venture for America the summer after my sophomore year, which is a startup nonprofit.

Gina: I worked at a Digital Agency called Brick Factory in D.C. I applied to Hatch Apps as a digital marketing intern. At Brick Factory I was working a lot in social media, web-design and analytics. I also was freelancing as a social media editor for a couple organizations. The skills I had at my other internships/jobs offered themselves pretty seamlessly to the marketing intern role at Hatch Apps.

Isabel: I hadn’t worked at a startup before, but I had some experience in entrepreneurship, as I developed and ran a summer camp for several years. I did not have a tech background, but I had project management and organization skills from previous jobs.

Q: What did typical day at your internship look like?

Devon: Every day at the internship looked a little bit different, which kept things really exciting! I would usually check in with the VP of Marketing, Selina, at least once a week to go over the marketing projects that I had for the week, but I also worked on capstone projects with Isabel, the Operations Fellow. Each day, I got to create my own schedule by prioritizing the projects that I had and dividing my time between them. Each week, I attended team meetings and team lunches, which made me feel like a true part of the Hatch Apps team.

Gina: No two days were the same. I did a lot of work planning social media content for Hatch, but there was a lot of innovation going on. While there we launched a few e-books and new product features. They always kept everyone in the staff in on conversations about what was happening next, and were super transparent and valued feedback every step of the day. A typical day at Hatch Apps is atypical, but in the best way.

Isabel: There wasn’t a typical day per se. I always had at least three or four projects I could work on, from email campaigns to ebooks to employee onboarding materials. Being able to touch so many different parts of the company was valuable because it gave me insight into what kind of work I enjoy.

Q: What project(s) are you proudest of?

Devon: I am really proud of creating Hatch Apps' first email course, How to Launch an App Business, through Hubspot.

Gina: Each of the blog posts that goes on the Hatch Apps site have a lot of research, time and love (!!) put into them. I’m really proud of the posts I have published there.

Isabel: I put together an ebook telling the real stories of entrepreneurs who were burned by developers. It was a fun project and really showed me how critical having a platform like Hatch Apps is.

Q: What was the biggest challenge interning at Hatch?

Devon: The biggest challenge of interning at Hatch Apps is that it is a fast-paced startup, which means that you have to learn how to be self-directed and juggle multiple projects at once. At Hatch Apps, you're expected to manage your own time, ask lots of questions, and be proactive, which I think are all really important skills to cultivate.

Gina: I’m not techy by trade, so having to learn more about the world of app development in general was challenging, but so rewarding and interesting.

Isabel: At Hatch Apps you get put on projects that matter and you’re not supervised every step of the way. I think that was a little daunting at first, and you have to stretch your creative muscles a little bit. But that responsibility and the chance to build something yourself in turn makes it a much more rewarding experience.

Q: How would you describe Hatch App’s environment?

Devon: Hatch App's environment is incredibly supportive. Everybody on the team really cares about one another and is motivated to push each other and grow. Due to the small size of the team, it is easy to get to know everybody and feel really comfortable in the space.

Gina: Light and fun but fast-paced and full of very hard working people.

Isabel: Very collaborative. For instance, we have weekly team meetings where the whole company gets together, and you hear from engineers about the product and the sales team about growth and the marketing team about strategies. It’s a neat space where everyone is constantly sharing ideas and giving input.

Q: What lessons or skills did you take away from this internship?

Devon: I gained a lot of experience working with specific tools, like Hubspot, WordPress, and Google AdWords. Beyond the tools, I learned how to develop a project from scratch, which involved taking risks and carving a path forward even when there wasn't one!

Gina: I was really able to improve my writing skills and my ability to work independently. You’re given a lot of autonomy, even as an intern.

Isabel: I became a much stronger writer. The ability to write about technical concepts in simple terms is especially helpful. I also loved becoming well-versed in the language and lingo of tech. I may not be a software engineer, but now I feel confident talking about development processes.